The following youtube video shows the B&O from Chillicothe should through Jackson and other inspiring areas. The details along the track are inspiring for HAVOC even though the time frame is different. The ballast shows cinder base with lighter colors on top, very similar to the HAVOC standards.

All through COVID we the members of HAVOC have been working on the modules. Much of the work is scenery related as most modules have have been in operation.

HAVOC is proposing a road trip to the Indy Junction NMRA Super Regional. Here are a few of the track plan ideas to be sent to them. They all include the in-progress Steel Mill module. It should have all track, basic scenery, some structures and mockups of the Steel Mill by the time of the convention.

The additional of the Steel Mill will significantly enhance our operating potential. CC&WB’s are used to forward freight and TT&TO will be used during operating sessions. We hope to have some during the show.

All of these are potential setups for 2022. Interestingly, each of the setups takes between 800 and 1000 sqft. Possibly that means the modules can be squished into any shape of that square footage. Hopefully we’ll go to Indy Junction and see you there….Come help us run trains!

The setup we had for 2019’s fall show did not contain the skewed bridge module. So I’ve drawing up two new plans to utilize the bridge module and fit in roughly the same space.

As the groups grows our potential track plans change. For 2019-2021 here are a few of the ways HAVOC can be setup. We hope to use one of these in for the 2021 October NMRA show.

Paul and Don have been progressing on the Bridge scene. Hopefully we can setup in 2021 or 2022 so more people can see Paul’s craftsmanship.

The scenery standards call for doing September scenery during the fall grain rush.  The standards call for predominantly green colored trees, only occasional orange and no red.  Yellow would be coming out.  Basically the scenery is to be just as color transition starts.  The following photos all taken within a few days in the middle of September for inspiration for our modules.  Standards or ratios can be derived from the photos as well as several other scenery hints/suggestions and outlined below.

Along Round Bottom Rd. The Peavine is to the right. Notice the light colors of the tops of the trees and grasses going starting brown. Golden Rod is present.

Round bottom east of I-275. Pevine is on along the road. Notice the various greens for the trees.

Same location as above, looking east.

Looking the the other way on the tracks

Looking across a field to a road row of trees. Notice the trees are green of various shades.   Some are very muted in color.  Few reds some trees are headed toward yellows.

Light green, yellows and just a bit of orange. This is the max color to inspire HAVOC.

Same day as above. A bit too much orange in one tree, but yellow and light greens. The tree without leaves is dead, it lost it’s leaves seasons ago.  This is absolute max ratio of color.  If all modules max at this ratio, such that orange is 1 in 30 and yellow is 1 in 7 or so, and the rest of the trees are shades of green, HAVOC will be believable and consistent across the modules. 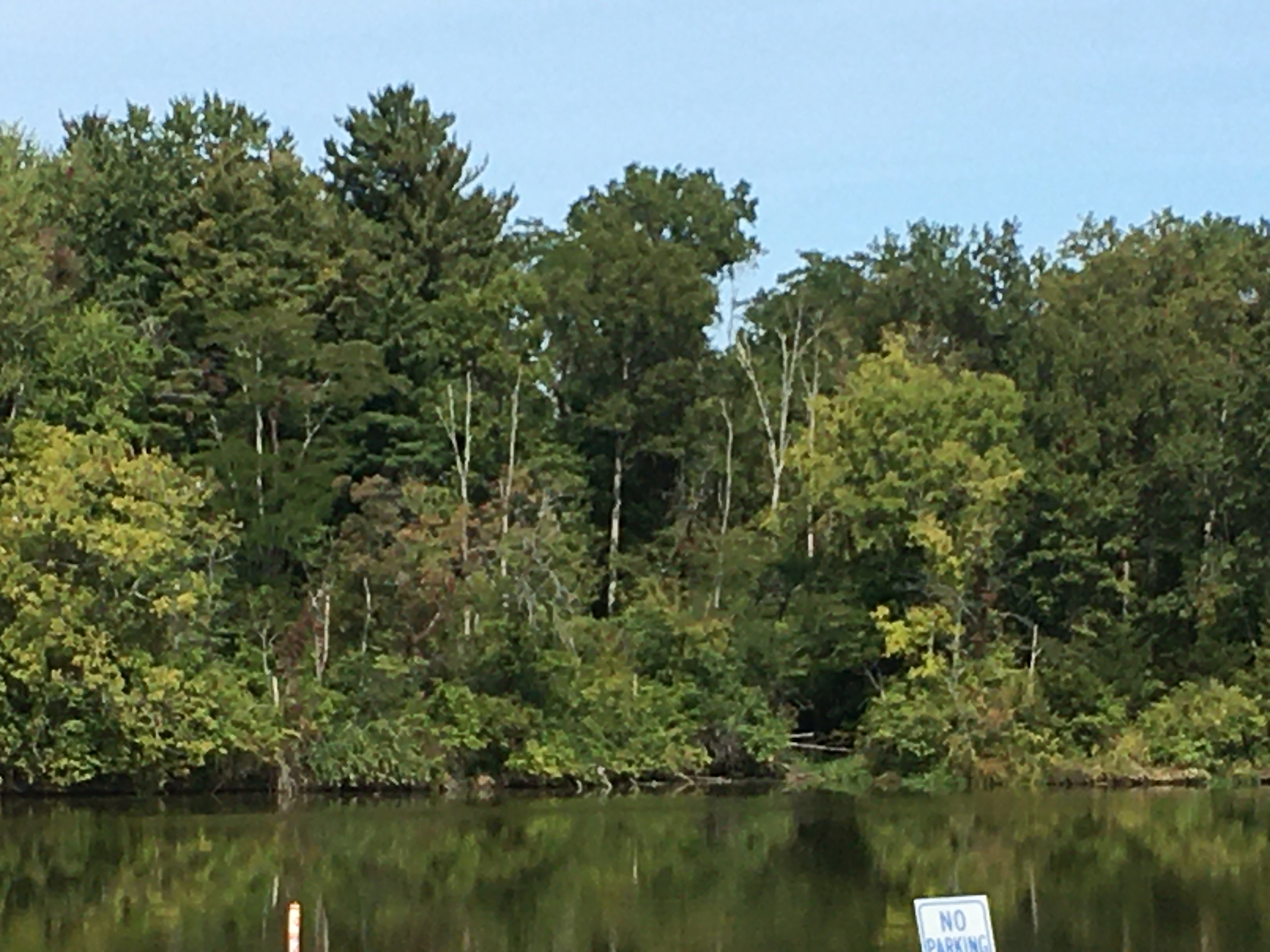 No orange here. Light greens and hints of yellow.

More field colors.  What plants are out in the field?  Are they correct for 1923?

Grasses along the tracks of CET Railroad. Light green, yellow and going brown.

Using the above photos and observations of that week, the following guidelines and suggestions can be made.

The difference of HAVOC’s membership is that we embrace such standards so that all modules look like a family even if the modeling is completed by different people.

Sam, a new HAVOC participant has taken over work on two  curved models.  The first is a curved module with a road crossing.  He has made a start on the scenery.  Sam is very detail oriented and works systematically.  He hopes to have one quadrant of the module fully sceniced for the All Scales show in Salem Ohio (March 22, 2020 weekend)

A closeup of the track as it approaches the future road crossing. Sam started by shaping the scenery, ballasting around the track, then adding the road. He has started to add earth, rocks and some static grass. 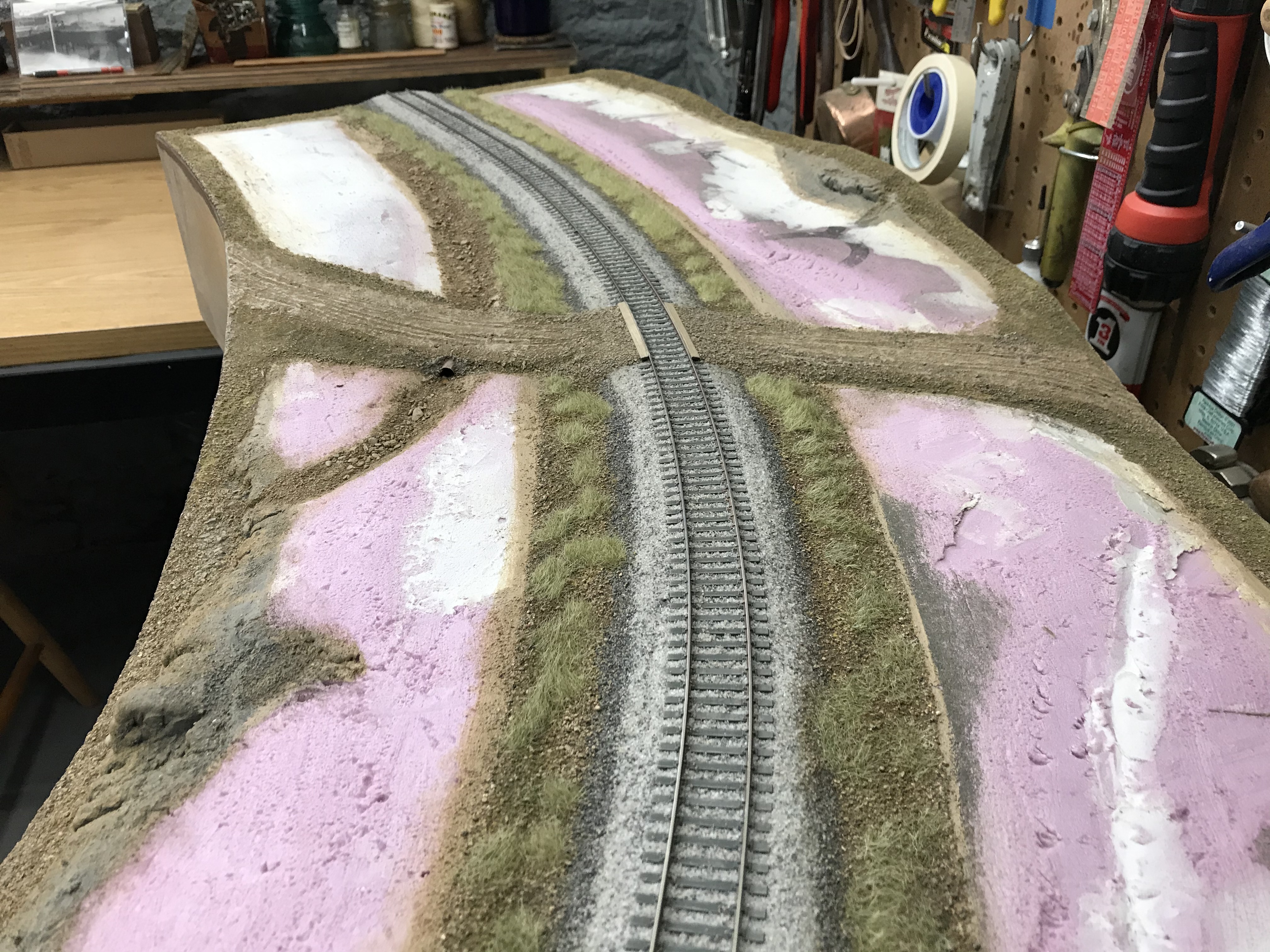 Sam started by doing the edges of the scenery near the track and along the fascia edges. The road divides the module into four quadrants that he plans to scenic uniquely.

The Rigling mills module was first posted about in Grain Elevator Module.  In that post the mill design was a single track with a spur to a Grain Elevator.  As the grain elevator module progressed and we considered the other modules in the pipeline, we decided that we needed a passing siding.  Adding an additional 5 feet to Rigling mills to make it a 10 foot module would be the simplest way to achieve our objectives.

Don getting a picture of his handy work. The Walthers grain elevator is perfect for the 1923 time frame. Like the prototypes it will be a skyscraper in it’s rural setting.

Don chats it up with one of the attendees to the 2019 NMRA Div-7 show. Chris is in the background watching on. The “bumpout” to the module fascia for the grain elevator can be seen at left.

HAVOC is not just a modular group, it is instead a themed layout with a story to tell.  A major part of that story is operations and more specifically TT&TO operations.  TT&TO operation are better the more distance a layout has between towns.  The distance provides two benefits:  1) Space for trains to switch so the engine of a train is not in one town while the caboose is in another 2) Traveling distance between towns for the feeling of running.  The HAVOC team feels distance is so important we even go so far as to request module participants build equal length of single track modules as double track modules (see the participation page).  To date no one has built both types of modules, but combined HAVOC collective has to achieve the equivalent. Our most recent single track initiative is four 45 degree curved modules.  Curves were chosen to enable the setups to turn back on themselves to fit smaller spaces.

Initially, the vision for the 4 modules was dramatic bridges and eye popping trestles inspired by an area of the PRR’s Zanesville branch east out of Morrow following Todd’s Fork a good sized creek.

Satellite view of a portion of the Todd Creek area today. The red dashed line is what I think was the railroad. The curvy Todd Fork is clearly seen crisscrossing the line.

In discussions with Tom Patterson, who canoed the Todds Creek in his youth (1970’s), we got the impression that the bridges were multi segment girder bridges.  The bridges were very significant and well above the water line (HAVOC members have yet to explore the area on foot)

Several design attempts were made to include one or more such bridges in the 4 curved modules.  A design was even considered where instead of independent modules, two curved sections would be used to offset the track from center and use sharper 30-36″ radius to obtain 9″ of straight track.  While 9″  might hold a bridge it just seemed too contrived.

To capture Todds Creek a different approach is required.  Rather bridges on the curve modules, put the bridges on small straight modules, say 24-36″ long, and use the curves to model the space in between the bridges.  If you look at the satellite view, there is lots of bland scenery between the bridge locations.  The bland terrain consists of road crossings, fields, trees, and the like.  Looking further east, Todds Fork is not as curvy and the distance between bridges become greater and greater meaning the ratio of pasture land to bridges increases until the bridges apart.  So a better approach capturing the essence of the PRR along Todds Creek is would be to make the curves pasture land and the and then at a future time model bridges on short trestles.

When the design for Todds Fork Creek modules stalled out, we started looking elsewhere for inspiration.  We knew the B&O Ohio Division had a few single lane underpasses.  Such an underpass would likely fit on a curved module.  Once such  scene was the Lacy Rd. underpass which became the inspiration for one of the modules.

Satellite view of Lacey Rd. The modules are only 16″ wide, so even building will be few. The focus will be on the bridge, track and railroad right of way.

Another inspiring scene is the rural road crossing that was very common in Ohio and elsewhere in the United States.  People cross them every day.   The E.Fork Rd. crossing may be the inspiration for another of the modules.

Approach to the EFork Rd. grade crossing of the B&O (IORY) looking South.

Southeast side of the EFork Rd grade crossing. HAVOC module builders take pleasure in the simple details of the fence, field, right of way, road and trying to image what it would have looked like in 1923. Maybe fewer trees? 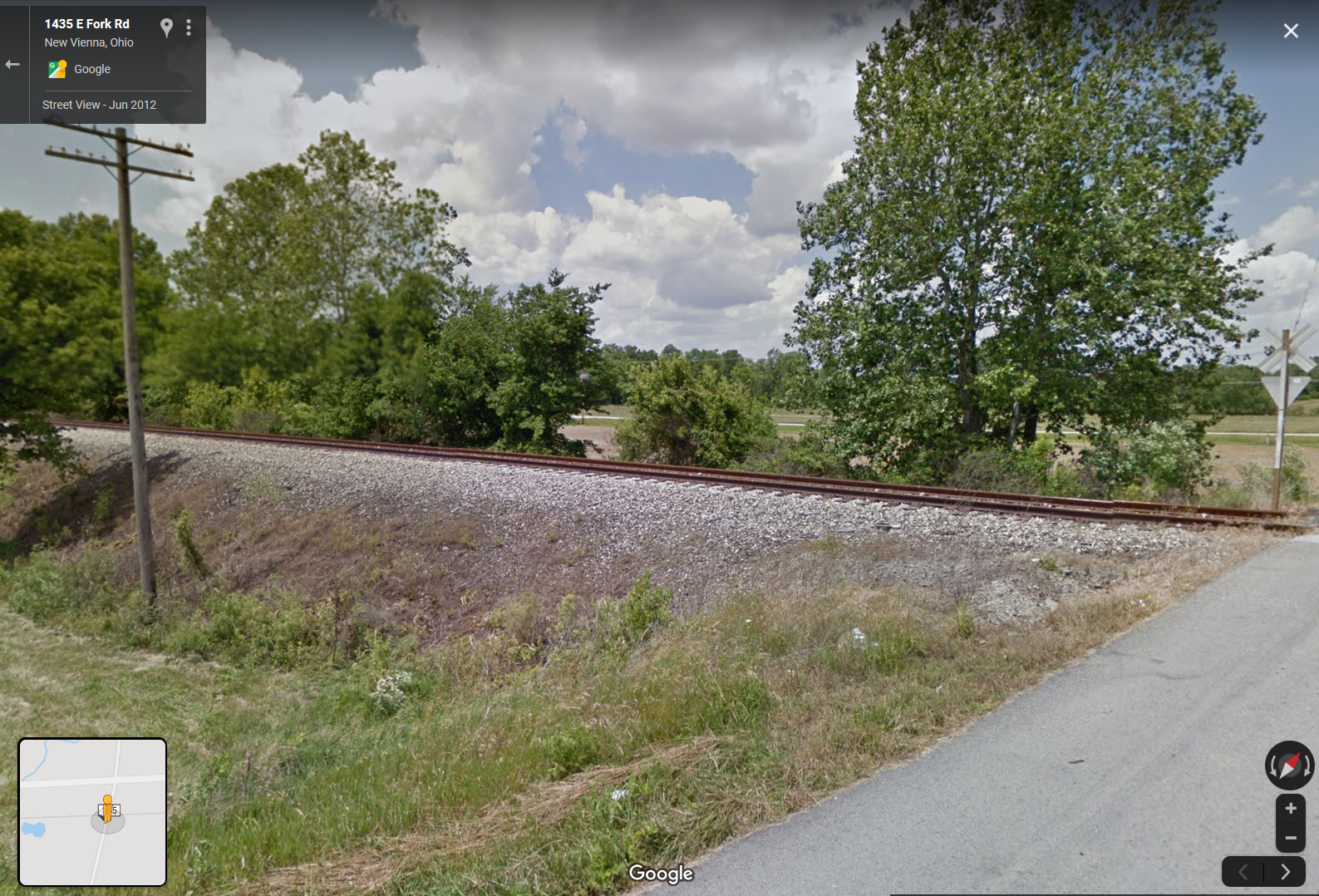 Southwest side of the EFork Rd. crossing. What would it have looked like in 1923?

Two of the curves appear in our 2019 setup at the local NMRA division show.  The scenery shaping had been started on them.  The Lacy Rd. underpass is the inspiration for one of the modules and the other is imagined as a side hill cut.  What will happen to the other two is unknown.  A new participant has offered to take them and make them his own.  We’ll see what he finds that is so bland it is exciting!

The earth color module is the cut module as roughed scenery and to the right of it is the underpass module. Both appeared at the 2019 NMRA Division 7 show as part of the setup. The modules to either side of them are scenery only modules too. The combination of the 5 sections is over 16 feet of running.